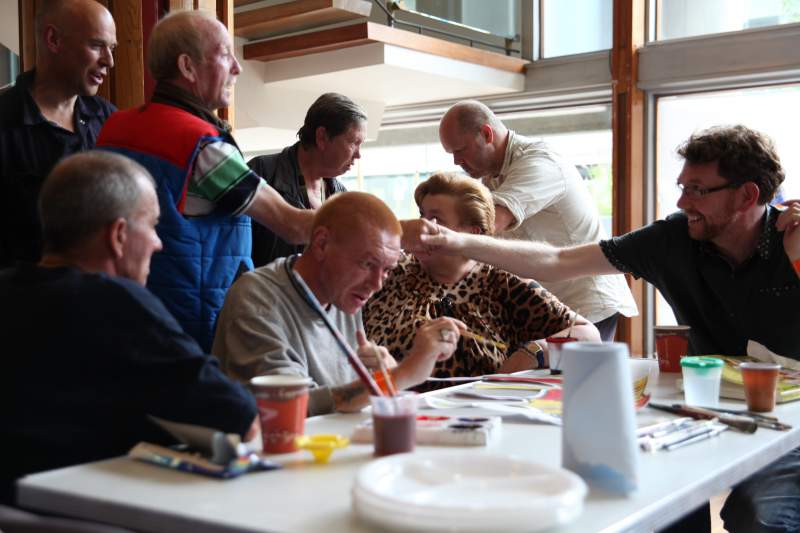 The Slaughterhouse club is a Duckie community project that takes artists into two London homeless hostels to work with residents, mostly addicts who are still using drugs or alcohol.

The project arose because Duckie’s Simon Casson, a recovering addict himself, understood the stigma that people with addiction face and how, when you are stuck in a loop of self-medicating emotional pain, how valuable simple activities that take you out of that experience can be.

He tells me over email that the project is called the Slaughterhouse Club because ‘London is a slaughterhouse, aint it. Homeless people are seen as being just like meat, lambs to the slaughter, animals, a meat rack – Also the idea of getting slaughtered, beaten and bruised by life on the streets.’

The Slaughterhouse Club works in two hostels. The Robertson Street hostel in Battersea, currently being refurbished, helps generally older people, some in their 80s, who are likely to have issues with alcohol. The one I visit, Graham House in Vauxhall, is a stones throw from the Vauxhall Tavern and has slightly younger residents in their 20s to 50s, often with drug problems. Most are men but about 10% are female. The hostel offers a temporary home to around 70 users, each paying £82 a fortnight for a room with a lock and key and three meals a day. Residents come and go as they wish and can bring alcohol into their rooms in limited quantities with strict rules about behaviour; the idea being that they are monitored and kept comparatively safe.

When I arrive I find visual artist Robin Whitmore and digital and video artist Tim Brunsden (a third person; theatre director Mark Whitelaw is not here today) in a small room with their materials and kit spread out across tables, pictures from projects on the wall and residents inside engaging with the work.

Robin is an artist who has been working with Duckie for years, having directed the iconic Gay Shame productions. He pops out for a coffee with me in the canteen and tells me about how the project started.

‘Simon organised a pilot 3 and a half years ago just to see what happened if a bunch of artists came in and set up a space without any specific goals’ he says. ‘Just to see if the users were interested in engaging with us. People were really interested. They came and spent a far bit of time with us and generally they weren’t drinking nearly so much and sometimes not at all.’

Seeing the effect it had on residents, the hostels management were enthusiastic about having the team back. The Slaughterhouse Club has been awarded a grant from the Big Lottery Fund and Vauxhall One which will enable it to run for one day a week in both of the hostels for 40 weeks a year up until 2020.

The vibe inside is casual. If residents want to, they pop in. If they don’t, no one forces them. There is no goal and even no emphasis on trying to get people to stop drinking or using drugs. The Club is simply a way for them to step away from their day to day issues and do something creative and, hopefully, therapeutic.

Unsurprisingly, Robin tells me, there is often resistance from some but that treating residents with respect, and as artists who have potential to create and participate in work that has meaning and value, often engages them over time.

‘I will lay out paper on the table and leave pens and crayons around’, he says. ‘I start off making marks, doodles on the table. People might come in to talk and tend to just start doing that as well and that’s how it develops. Getting people to be involved in an unconscious way, to start with, then getting them to reflect. Giving lots of praise. People’s confidence is so low. It’s why everyone’s here, I suppose. There's alot of hurt in peoples lives’.

Robin shows me some of the work that the residents have done. There are coats of arms with images of things that individuals might be passionate about. One has Manchester United’s red devil emblem, a British Lion and a man and a woman, which the service user dressed in very specific colours. Another has steam trains, a greyhound and an image of Blackpool tower. Robin shows me some of the residents artworks that he has photographed onto his Ipad and shows me other images that have been placed around the room. The work is colourful, eclectic and vibrant. It’s clear that the work helps the residents open up. Most people in general life do not engage with the humanity of people living on the street, as we walk past. The artwork is moving and affecting.

‘It’s great when they lose themselves in it and are in the moment’ Robin says. ‘They create something exciting or interesting. They’ll say ‘I really enjoyed that. That is great’.

Tim Brunsden is a video artist with a passion for community representation and empowering marginalised people. He might make short documentaries or animations with residents, some of which can be seen on Duckie’s website, or sometimes records them and inserts them into scenes from classic films. At the end of a ten-week cycle the club holds a communal screening where they show clips from films and rock videos interspersed with work that the residents have done.

‘What we try to do is to be celebratory of them and not just define them as homeless as if that’s all they are’ he says. ‘That is their story but we try to tell that in a different way, so that they aren’t ‘othered’. Lots of people have difficult experiences that have brought them here. This could happen to any of us’.

I ask him if it can be challenging working with people who are often struggling.

‘This hostel can be rowdy. There’s never been anything directed at us. But it is frustrating when it’s people who are engaging who then struggle with a drug, perhaps. For instance, one man who was doing great work had an episode with Spice and became violent and was excluded’.

There have been residents who have passed away during their time at the hostels. This is, Tim says, another reason why this work is so valuable.

‘The good thing is that because we’re not the staff, we’re not policing them, so perhaps we can have a slightly easier relationship which is focused on getting them to express themselves. Doing this work brings people together. It enables them to engage in an act of sharing, sharing their projects with other people’.

There is a disproportionate number of LGBT homeless people and Tim introduces me to a resident in his mid 50s called Clint who has been at the hostel for a year and 4 months. Clint, a white man, grew up in Rhodesia, where he could have been imprisoned if he had come out. He tells me he felt disconnected from his friends because they didn’t know the real him and, like so many gay men, married and had a child, hoping his feelings would go away. Eventually he and his wife and daughter moved to London where he saw a different attitude towards gay people.

‘I was living a horrible lie’ he says, ‘When I came here I could carry on living that lie or come out – and I came out. But I had no idea what to do, where to go.’

He says his experience of the gay scene was entwined with drug use. Like so many gay men he began taking mephedrone, eventually injecting it, before moving on to crystal meth. ‘That drug just takes you by the balls’ he says. ‘You lose touch with humanity. You stop caring about yourself. It takes you down. You feel like it doesn’t matter if I change my clothes, it doesn’t matter if I clean my room. I made the decision to stop.’

He’s proud he is now sober and is glad that the HIV he caught is undetectable. He is also living with Hepatitis C. He is estranged from his ex wife and daughter who couldn’t cope with his HIV diagnosis. It’s clear that The Slaughterhouse Club, where he is working on a blog with Tim, gives him so much more than just a creative outlet.

‘I love it’, he says, ‘I look forward to Fridays. They talk to you not at you. They treat you like a human being. Other places forget that you’re a human. They see you as ‘a homeless person’. I get angry with that. Just because I’m homeless doesn’t make me any less human than you. Once a week I step into the real world. When you live in a hostel you become instituionalised really quickly. It’s made a huge difference to me; interacting with normal people.’

Matthew Todd is the author of Straight Jacket: How to be gay and happy which is out now. His website is here.